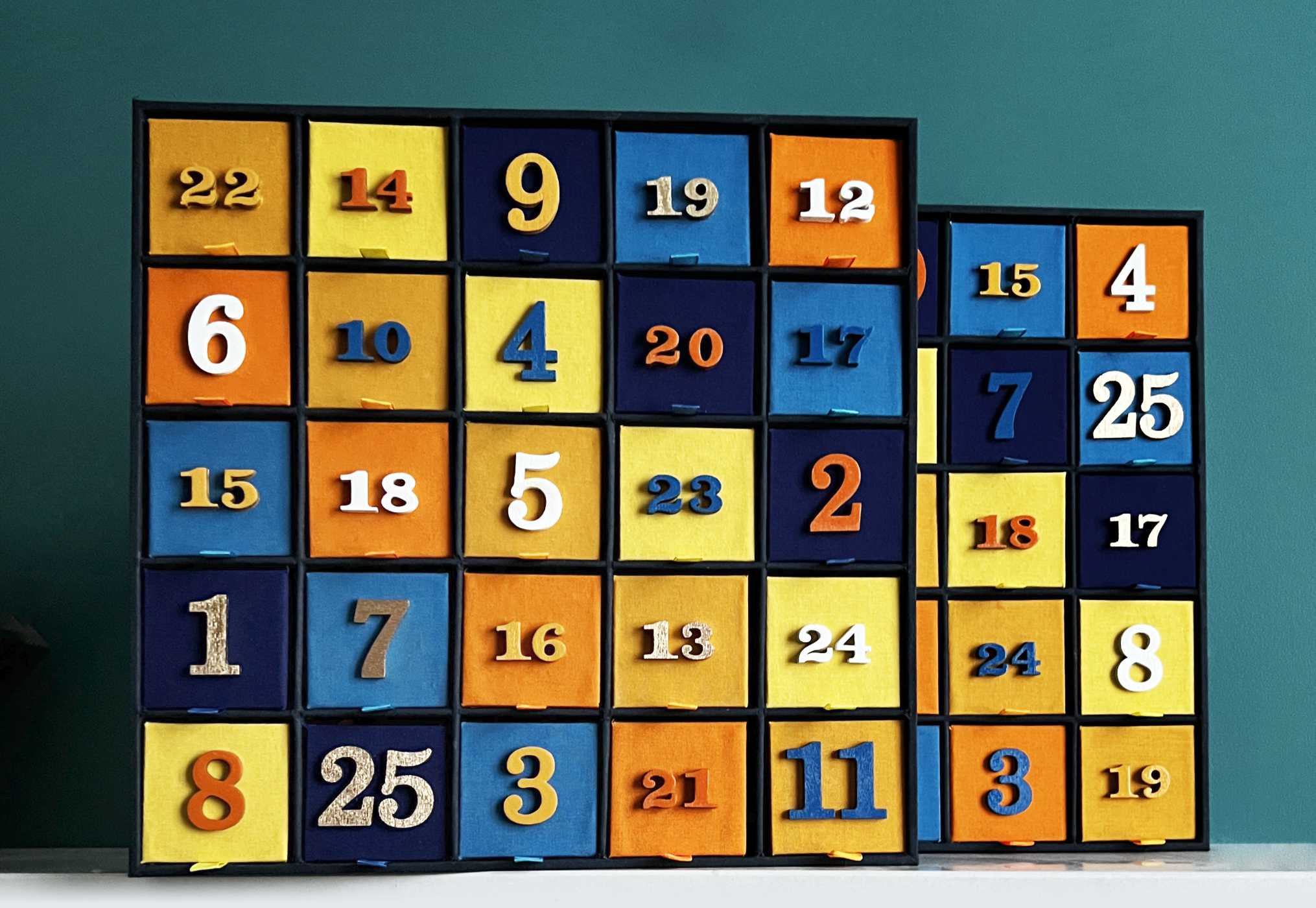 I’ve had a complicated and unhappy relationship with Christmas and it’s taken me a while to reach an accommodation with it, avoiding the toxic and keeping the good. I realised I like advent calendars, especially the kind with chocolates in, and I’ve had them for the past few years. We had the picture-only ones as kids, and they only went to 24, with the chocolates-goes-to-25 being Not Proper or something, but I’m an adult now so I get to decide about that.

The problem with them is finding good ones, as they’re all full of plastic, expensive for what they are and if you’re vegan then screw you, you’re going to pay the same as everyone else for something half the size, with no variety and substandard quality. I mean, how dare you have dietary requirements? No fun for you! I’m not vegan but my husband is, and the difference between the one I get and the one he gets for the same price from the same company is scandalous.

So, enough is enough. I’m going to make reusable advent calendars and we can choose what goes in them.

That's a lot of boxes

After deciding to do this I did have A Bit Of A Think because I realised I’d have to make fifty small boxes as well as two large boxes with 25 compartments each, and all the boxes would need numbers, lining, covering, some way of getting them out, and the container boxes would need lining and have to be strong enough. I’d also decided to do this towards the end of November, so I needed to get it all done before the 1st of December. Tricky. Better get on with it then!

The calendars would have numbered drawers in a 5 by 5 grid arrangement, held in a sturdy container box. The drawers would be small boxes and wouldn’t be fixed so they could be rearranged in any order. This is because advent calendars usually have the ‘doors’ numbered randomly so you have to search for that day’s one, and I wanted it to be different each year.

The outer containing box would then be covered in a dark bookbinding fabric.

First! Card. I bought 3mm and 1.5mm greyboard. I do have a guillotine I thought would make this easier but despite what it claims it doesn’t do a good job on card. Slant-a-rama. So all the card was cut using scalpels and a strip of 5mm thick stainless steel I bought online - most straightedges are aluminium (especially the ones that claim to be steel) and I found I was cutting through the metal. Annoying, and surprising.

Honestly, this took so long and was so boring and used up so many scalpel blades I’m amazed I didn’t take more pictures. I got so fed up at the number of strokes it took to cut through the card that I ended up pressing quite hard, so had a bruise on my finger (as well as cutting through the straightedge until I got the steel bar).

I was very careful though, blades scare me.

Here are some of the squares cut out. I covered the greyboard with coloured paper before cutting. I felt such a sense of relief to have all these stacks cut out.

The thickness of the lining paper meant I had to be careful with my measurements. For each box there’s a 46mm square base in 3mm board. two 50mm square sides and two 50mm by 46mm sides. They all come together to make a 50mm cube box.

This is part of the assembly process. I happened to have this CD rack my husband made which is a brilliant jig for keeping edges square. I also had these 50mm square-ended chunks of wood. It made this whole process possible.

Look at all these! All these boxes! So many boxes! Here a box! There a box! Everywhere a box box! Endless boxes! I know some of the boxes look uneven, especially under this harsh lighting. Some of the sides had curved very slightly when I glued the lining paper on, and I needed to weigh them down to fix it. It didn’t affect many of them though.

Because of this and a few edges I didn’t like, I decided on a ‘front’ for each of the boxes and labelled them accordingly. This would mean all the drawer fronts would be a ‘nice’ side of a box.

Covering the boxes. I vaguely remember cutting out the pieces of fabric, but there’s no photo. It’s very strange as I take pictures of everything, so I must have been very bored by it. Attaching the covering was quite pleasant though, even if applying the glue was a bit tricky. I had to be very careful not to get any glue on the outside surface of the fabric as it would leave a stain. Those little triangles kept showing up around the house for months after.

Ribbons! This was simple and straightforward. I put the ribbon on before gluing the bottom piece of fabric to the box, which makes it more secure.

Look at all those boxes. That’s just 25 of them. Standing behind those are 25 more. I made all those boxes. The other picture shows the inner structures of the container boxes. For some reason I didn’t take a photo of making the rest of it. I think I was in a bit of a rush at this point, this photo was taken on the 28th November. Two days to go to finish!

Numbers! I bought these. Now I’d cut them myself but I didn’t have a laser cutter then. I attached some low-tack masking tape sticky side up to some strips of cardboard and stuck the numbers to them, then spray painted them. It meant they didn’t move around and were also easy to remove.

I really like how the numbers turned out, as well as how the card/tape strips turned out. I've kept the gold one just because I like the blue numbers against the gold.

And there we go! I’d bought some fancy chocolates to go in the boxes as well as some food-safe tissue to wrap them in. Again no photo but late on the 30th I was there stuffing the boxes with goodies. I’d done it!

A couple of years ago I did a bookbinding course taught by Peter Jones at the University of Brighton, and as part of that we learned box making as it’s all part of the skillset. Then I realised it wasn’t a couple of years, it was more like 20 years. I could remember a lot of it, but Sage Reynold’s tutorials on YouTube are brilliant and helped me enormously, as did Simon Goode and Ira Yonemura’s Making Books.