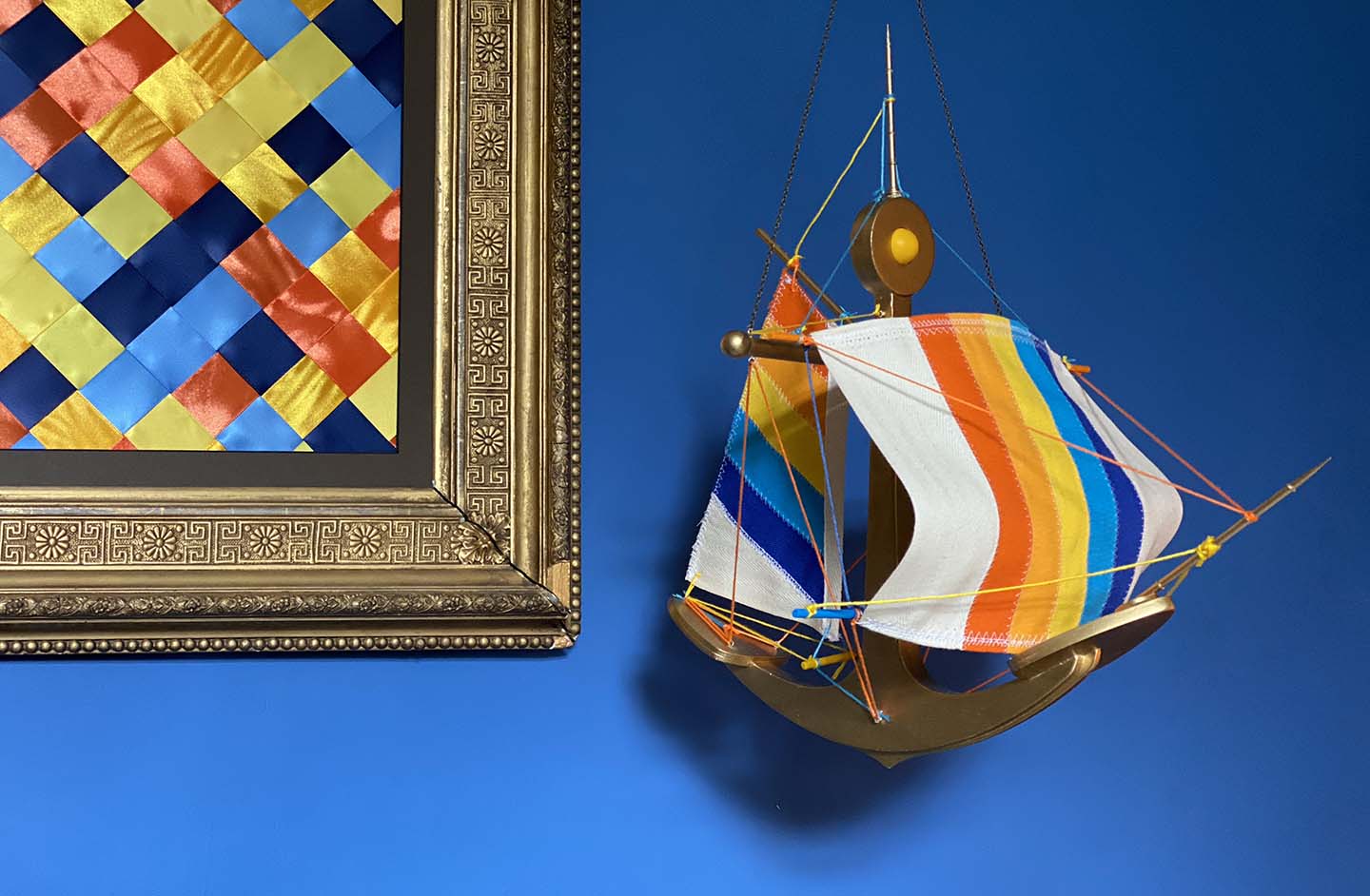 I made a thing! I actually completed something I started. It’s an idea I’ve had knocking around for ages, an anchor that’s a ship, or a ship that’s an anchor. I really like the idea and it works well. I might make it my logo or something.

First, some research. An anchor, right? Totally familiar and simple to draw, just like drawing a bike from memory (yeah). So I looked it up online and found there are lots of kinds of anchor and all the images you see in logos, tattoos or whatever are stylised versions of… one of them. Turns out it’s an admiralty anchor and it’s Probably Not Like What You Think It Is. I ordered a model of one. Look at this:

I didn’t know the cross bar thing not only wasn’t in line with the curved bit, it’s an L-shape and folds neatly out of the way! How about that. First bit of creative license: my one won’t be L-shaped, or folding.

I wanted to make it out of wood, but I don’t have the tools or setup for doing that myself. I’d like to, but for just one model, nope. I had some small sheets of hardboard around and thought I could cut them and build the anchor in layers. Again, cutting hardboard accurately by hand with a limited setup: nope. So! After lots more research I went for laser cut MDF. I can actually genuinely recommend RazorLab for that, they’re really quick. Perfect little slices of MDF arrived in the post ready to build (and they smell really nice too: toasty).

I used Tacky Glue for another project and used it here too; it’s very controllable and extremely forgiving. It’s also non-toxic and water soluble and doesn’t smell bad like super glue or epoxy ones. The main body of the anchor was made of five layers so I glued them carefully and weighed them down with books and didn’t notice I’d created a tiny slope when I put them down so there was a very slight skew to the whole thing. That was a pain to correct (with sanding and filing, sigh).

The other non-MDF bits were some dowels (3mm, 6mm and 10mm), bamboo food skewers (because I didn't want to have to sand down a point) and some wooden balls and half-balls. I have some eyelets and so on from other projects, so that's what the rigging attaches to.

The sails are made from cotton herringbone twill binding tape. I originally tried using polyester satin ribbon but it's so fragile it looked terrible. This cotton tape is brilliant. The colour scheme follows the other things I've been making for my workroom wall and I'm really pleased at how 70s it looks.

I didn’t enjoy this bit. Because I’d sanded the MDF it’d gone a bit ‘furry’ so I knew I’d need a few rounds of primer and sanding to get a smooth finish but ugh it’s so unpleasant. Spray paint gets the best finish but it’s horrible horrible stuff, it literally stinks. I built a spray booth inside my squat rack with bin liners to protect everything but still there’s paint dust everywhere. I’m going to have to get all that up so it doesn’t get out or go down the drains.

The rigging is all embroidery thread (to match the colours of the sails) and is purely done to hold the sails in place. It’s not like there are any schematics for sailing anchors out there, but I think I made it look functional-ish. It was a lot more fun than the painting, but it’s still very very fiddly. I’ve never really had a problem with having large hands before until this. Good grief! Still, this is what tools are for and funnily enough embroidery needles work very well with embroidery thread.

I wanted to hang the ship up and I went looking for hanging brackets you can hook onto picture rails rather than screw into the wall. I distinctly remember them from my childhood, we had at least one macramé plant pot holder hanging from one, I’m sure of it. But now? I couldn’t find a single one. So, back to MDF! The anchor is very light so it wouldn’t need anything too elaborate but I wanted it to look purposeful. This was a real pleasure to build. I think it shows I’ve learned stuff because designing and building this went very smoothly. I used the same paint we did the picture rail in (same colour, different finish, as the wall) so it’d blend in.

And there it is!

I used some lightweight chain (again, from an earlier project) and metal rings to hang the anchor from the bracket and now it gently turns in the breeze when I have the fan on. I’m really pleased with it.